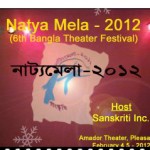 Last year, in October, Sanskriti was involved in organizing a festival to celebrate Durga Puja Other Cultural Programs and activities, including games like Carom and Table Tennis. As well they organized an event to pay tribute to Rabindra Nath Tagore on the occasion of his 150th Birth Anniversary at the same location Amador Theater, Pleasanton.

This event is being organized by the Spiritual Science Research Foundation (SSRF). SSRF’s aim is to “educate society on the spiritual dimension and how it affects our lives. We conduct research and convey knowledge about the spiritual dimension to help people understand it, advise those who are curious to experience it for themselves, and guide those who have intense desire for spiritual growth and God-realisation towards achieving their goal.”

SSRF was founded with the blessings of His Holiness Dr. Jayant Balaji Athavale. As a Consultant Clinical Hypnotherapist, he had learned that some of his patients with whom he had very little success, had recovered after adopting spiritual remedies such as visiting sacred places, remaining in the holy company of spiritually evolved people (Saints) or performing certain religious rituals. After interacting with Spritual minded people, he concluded that there are spiritual causes behind not just illnesses of patients, but also behind all major events and most problems in life. He worked tirelessly in the field of Spirituality to share with others his research into the understanding of the spiritual dimension using a scientific approach. The believers also believe in their ability to perceive the subtle dimension or the unseen world, or in other words, sixth sense.
The organization is based out of Australia, has very active member base in Europe, and also registered in the USA.
Not sure what brought the workshop to the Dublin (California) Library, but it may be worth attending – even if just to get more exposed to the intriguing concept.
Check out this video on the concept:

Understand Your Child – Workshop will be conducted on February 3rd, 2012 – 7:00pm in Dublin, CA.
Parenting can prove to  be a very rewarding experience in one’s life. Because of the changes in our  lifestyles, values and human relations, parenting is also becoming a challenge with parents having to deal with many issues related to children’s behaviour.  Often parents are found saying my kid

· Does not listen to me
· Jumps around and breaks  many things
· Does not eat properly
· Is just glued to the TV  all the time
· Is just not interested in studies, etc.

Understand Your Child workshop is a 2.5 hour interactive seminar from the Art of Living which helps parents deal with several such issues by finding the root cause behind them. It gives them an insight into how children think and thus a better understanding of their behavior. It points out small things that adults tend to overlook that may have a deep impact on children. Several hundred such workshops have been conducted benefiting many thousands of parents making their relationships with their children much more harmonious.

Please click on the following link to register for the workshop: http://secure.artofliving.org/event_details.aspx?event_id=102175

Recently moved our office to Pleasanton and looking to hire an Office Assistant. Excellent communication and computer skills are important.

No prior experience needed. Flexible work hours can be worked out.

Only looking for long term players.

Stop by at the Dublin Library on Sat, Jan 28 for a “breathtaking” bollywood music concert by Jhankar Live. Started in 2006 by a group of passionate music enthusiasts, the team excels in presenting soft, melodious songs as well as fast-paced numbers. 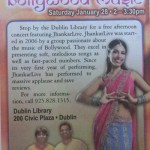 JhankarLive also performs for charitable causes and supports education and artistic talent development of poor children. Members of JhankarLive, fondly called “the jhankaris”, are all full-time employees of leading Bay Area organizations. Since its very first year of performing, Jhankar Live has performed to massive applause and rave reviews. For more information about the free afternoon concert, please call (925) 828-1315 or write to [email protected]

Update: Jan 28, 2012
The group performed to a packed hall. The songs were chosen in memory of late Deva Anand and Shammi Kapoor. Entertaining!

Local Pleasanton based ‘Downtown Yoga’ is organizing a “Return to India” – a 14-night/14-day retreat in Tamil Nadu and Kerala. If you wanted to visit India with a Yoga twist, this could be your chance! Dates are February 11-25, 2012.

Danae Robinett and Jim Coughlin will host and guide the group. The group will be staying at the Kondai Lip Backwater Heritage Retreat Center. This event is limited to 24 guests. Pricing is Single $3,490 per person, Double $3,190 per person, Triple $2,990 per person. All guests will be responsible for their round-trip airfare to and from Bangalore.
The pricing includes 14-nights accommodation fees, all yoga practice fees, all travel to and from the Kochin Airport to the Kondai Lip Retreat Center in Kerala, all internal travel to and from sacred sites and tour events, all meals, all event coordination. 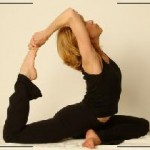 Downtown Yoga is located on Main Street in Pleasanton, California. Number is 925-819-9983.
They align most closely with the Iyengar Yoga Tradition and integrate several fundamental directions from the Yoga Sutra of Patanajali in their philosophy & teaching.
The next Spring Renewal Retreat will be from April 28 – May 5, 2012 that takes you to Haramara Retreat Center in Sayulita, Mexico.

The ‘melting pot’ that is America is at no time more evident than during the holiday-season. It reaches the crescendo at Christmas, when, whatever your ethno-religious background, you just don’t want to NOT be a part of all the revelry. What does it then mean for non-Christians, especially as you see yourself doing more for Christmas, than for your own festivals?

Shalaka Gole, a budding student of journalism from California High School in San Ramon lays it out rather nicely in an article posted on December 23, 2011 in San Ramon Patch .

An All-American Christmas, the Hindu Way:
There is nothing like the voices of Dean, Bing, Ella, Frank, and Judy to ring in the holiday season. This year, I started listening to Christmas music on Nov. 28. Our family’s old prelit tree stands decked out in the corner as early as Dec. 4th. And I was planning Christmas presents to my friends before Thanksgiving.

This is all pretty standard American stuff, but I did all this disregarding the fact that I was raised as a Hindu in an Indian house.

I wholly subscribe to the American idea of Christmas, along with my immigrant parents and little brother. We do dress up and cook for Diwali, every year. But Christmas presents are also the norm, decorating the tree is a major event and Santa came for my little brother for 10 years. We have been willingly sucked into the commercialism and culture of the season, and I’m not terribly sorry.

I used to feel guilty about liking Christmas and felt like I was trying to fit myself into an idea of Christianity that I don’t believe in. I wasn’t sure of what it meant for me to love Christmas, a holiday that wasn’t really mine to celebrate.

But I’ve started thinking of Christmas as a culturally American time, where different kinds of people can come together for many different reasons. To some it may rightfully mean the celebration of the birth of Jesus, but to others like me, it means the mood and actions of all those around me.

There is something about the feeling of the holidays that makes the cold air less biting and puts everyone in a better mood. People smile more, sing more, count their blessings, and give to others. At school, I see Jews, Christians, Hindus, and religiously confused teenagers alike talk about how much they love the atmosphere. It’s cliché, but I think the cliché stems from truth.

I think Christmas can be said to embody America, commercialism and a profit-driven mentality mixed in with charity and good feeling, shared by those of all ethnic backgrounds. It has become a holiday anyone can celebrate, and include or leave out the pieces they wish.