An information session will be held on Sunday, Jan 5 from 10-11am in the Castro Valley High School Cafeteria.  Enter from the gates in the middle of Mabel Ave; the cafeteria will be the first building on your right.

Join the most exciting science competition in the nation!  Encourage your child for a lifetime of curiosity and learning through the competition!
Castro Valley Science is pleased to announce its second Elementary Science Olympiad Competition, to be held May 4th, 2019 at Canyon Middle School in Castro Valley.  We invite parents in the Tri-Valley area to form teams of 6 students (4th & 5th graders recommended) and register online at cvscience.us/elementary/ .  For more information, contact sciencecastrovalle…@g…com

Meet the young geeks upon whom your future depends: Kashfia is one of the only Muslim students at an enormous school in South Dakota, and takes an inventive approach to studying the human brain; Myllena and Gabriel are two teens from an impoverished region of Brazil, whose research can help stop the spread of the Zika virus; and Robbie is a passionate teen from West Virginia who is obsessed with number theory, Kanye West, and artificial intelligence. These are some of the nine students featured in the National Geographic film “Science Fair”,  which won audience awards at SXSW and the Sundance Film Festival.
Castro Valley Science, in conjunction with the Castro Valley Educational Foundation, invites the East Bay and community to a very special screening of this quirky and inspiring film. It will be shown at the Castro Valley Center for the Arts at 6:30pm on Thursday, January 10.  Attendance is free but registration is required at http://bit.ly/science-fair-cv.

Castro Valley Science is pleased to announce its second Elementary Science Olympiad Competition, to be held May 4th, 2019 at Canyon Middle School in Castro Valley. 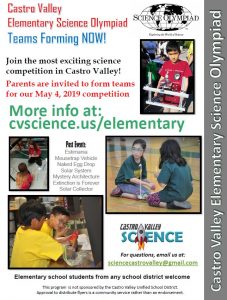